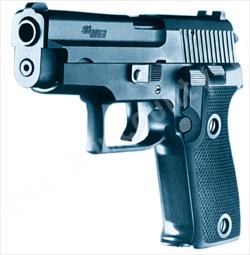 It's relatively straightforward, actually. First you go to the Sheriff's office in Eureka and pick up the packet that contains several pages of questions, plus a list of locations that offer the mandatory CCW course. The questions include the usual stuff, mostly asking you if you have ever committed a crime or are subject to a restraining order. They also ask you at the end to write down the reasons why you feel the need to get a CCW.

Then you sign up for the $65 class at one of the listed locations. It's just two 2-hour courses which are mostly filled with videos covering the laws and regulations pertaining to citizens carrying concealed weapons.

Then you must qualify at the range. The qualification consists of firing 50 rounds at a human silhouette paper target at 15 yards. In order to qualify, 80% (or 40 out of 50) of the rounds fired have to land in the "scored zone" of the target. There is no time limit.

Once qualified you simply return to the Sheriff's office to be fingerprinted, have your application reviewed, and pay your $165. Then it's as much as eight week's wait before you get your permit in the mail.